Introduction: The quality of drinking water is an important factor that may affect broiler performance. Water is very important resource for poultry and is mainly supplied from groundwater sources, rivers, and springs. In addition to being a nutrient, water also softens food and carries it through the body, aids in digestion and absorption, and cools the body as it evaporates through the bird’s lungs and air sacs. Water helps remove waste, lubricates joints, is a major component of blood, and a necessary medium for many chemical reactions that help form meat and eggs. This study discusses some of the most common factors that impact poultry farms water quality. Therefore, this study aimed to investigate the chemical quality of samples obtained from various sources of poultry drinking water in Noorabad city of Fars province and neighboring villages.
Materials and Methods: This study is a cross-sectional study and was conducted for evaluating the quality of water used in poultry farms in Noorabad city of Fars province and neighboring villages such as Dam Qanat, Kol Gah, Gazargah, Arab Khalifa Sofla, Fahlian, Tal Kohneh, Mal Mahmoud and Bajgah. Total hardness, pH, total dissolved solids, chlorine, calcium, magnesium, and sodium of water in nine regions were evaluated. This study was conducted in the second quarter of 1399. Water sampling was done in 30 poultry farms with three replicates. For this purpose, three samplings were randomly taken from each poultry farm three times a month. The samples collected in plastic containers were immediately tested for pH and transferred to the laboratory for other experiments at room temperature. The sampled poultry farms used well water.Total hardness, pH, chlorine, calcium, and water magnesium were measured using a model 7500 photometer according to the device's instructions and APHA. Results were analyzed statistically by SPSS software version 20 and the One-way ANOVA test with the Duncan post hoc test. Mean ± SD was considered significant if (P<0.05).
Results and Discussion: When the water looks clear and tastes okay, water quality is easy to take for granted. However, water quality is impossible to judge adequately except with laboratory testing. Field experience has conclusively shown that unobservable differences in water quality, from farm to farm and even from one well to another within a complex, can result in significant differences in bird performance. Drinking water should be clear, tasteless, odorless, and colorless. As a general observation, a reddish-brown color may indicate the presence of iron, while blue color indicates the presence of copper. Hydrogen sulfide is indicated by a rotten egg odor. Hydrogen sulfide may also combine with iron to form black water (iron sulfide) that may also implicate the presence of sulfate-reducing bacteria. Taste can be affected by the presence of salts, and a bitter taste is usually associated with the presence of ferrous and manganese sulfates. The highest amounts of total hardness (1169 ± 0.52 ppm), calcium (583 ± 0.57 ppm), total dissolved solids (1398 ± 1.5 ppm), sodium (259 ± 0.57 ppm), and chlorine (403 ± 1.00 ppm) belonged to the water of the Bajgah region. In talkohneh, the amount of magnesium in water (289 ± 0.55 ppm) was significantly higher than in other regions. Water pH in Nourabad (7.15 ± 0.020) was less than in other regions and was neutral.
Conclusion: Water quality attributes can have a direct or indirect effect on performance. Poor water quality can retard the growth, curtail egg production, or result in production of lower egg quality. Feed conversion, for example, has been positively correlated to the presence of sulfate and copper concentrates in the water, and livability with potassium, chloride, and calcium. Bodyweight is positively influenced by water hardness and dissolved oxygen and negatively influenced by total bacteria and pH less than 6.0. While several elements can cause poor water quality, the interaction between elements is more significant in water quality problems than the simple fact of their presence. The findings of this study reveal that, in terms of total hardness, Damghanat water was more suitable for poultry drinking and aviculture than other regions. Water TDS of each nine evaluated regions as appropriate. In Damghanat and Arabkhalifehsofla, the amount of water calcium was more suitable. In Malmahmoud, Fahlyan, and Talkohneh the amount of water magnesium was more than a threshold for poultry. Gazergah has the most suitable water chlorine status. Water sodium was more than 50 ppm in all regions except Kalgah. pH less than 6.3 decreases the yield of the poultry, however pH of none of the regions was less than 6.3. Low pH water can be unpalatable, corrosive to equipment, and may have a negative impact on performance. High pH water is also unacceptable since it reflects high levels of calcium and magnesium, which can clog water systems. Poultry accepts water on the acid side better than they accept water on the alkaline side. The results of the present study indicate the poor quality of water in Nurabad, which is recommended through solutions such as the use of acidic compounds to remove sediments and adjust the pH of water, as well as the use of orthophosphates to harden water. 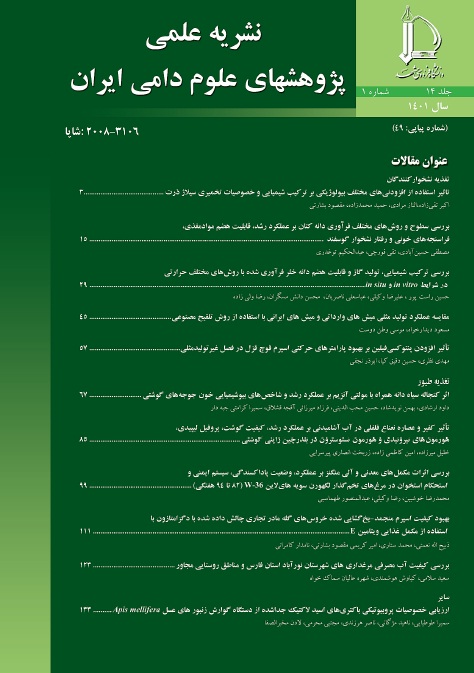