Introduction Although there are different ways of reducing the adverse effects of heat stress, including changing feeding methods and using various supplements in feed and drinking water, most of these methods are associated with reduced performance. Changes in dietary electrolyte balance have been suggested as one of the effective ways to reduce the adverse effects of heat stress in poultry. Although most studies found that amino acid metabolism can both affect or be affected by the acid-base balance of the body, the relationship between the dietary electrolyte balance and the dietary threonine concentration in broilers has not been well explained, especially under high temperature condition. Therefore, the objective of this study was to evaluate the effects of different DEB and threonine levels on growth performance, biochemical parameters, antioxidant status, thyroid hormones, and immune response of broiler chickens reared under high environmental temperature conditions.
Materials and Methods A total of 600 one-day-old male broiler chickens (Ross 308) were used to investigate the effect of different levels of threonine and dietary electrolyte balance (DEB) on performance, serum biochemical parameters and antibody response under summer temperature condition. All birds received a common starter diet in mash form and were raised conventionally up to 10 days of age, after which they were reared following a completely randomized, 3 × 2 factorial design experiment with 5 replicate pens of 20 birds each. Treatments consisted of two threonine levels (100 and 110 % of the commercially recommended levels) and 3 levels of DEB (175, 250 and 325 mEq/kg of diet). The average minimum and maximum temperatures inside the poultry house recorded from 11 to 42 days of age were 23.7 and 37.3 °C, respectively, with a relative humidity of 55 ± 3.45%. Average daily gain (ADG), average daily feed intake (ADFI) and feed conversion ratio (FCR) of birds were determined during the grower (11 to 24 days) and finisher (25–42 days) periods, and also for the total experimental period (11–42 days). Two birds per replicate pen were randomly selected to evaluate the cell-mediated immune response to phytohaemagglutinin-P (PHA-P) on days 36 and 37. Blood samples (2 samples per replicate) were collected for measuring antibody responses (days 28 and 35), and also for biochemical analysis (day 42).
Results The results showed that the low DEB group significantly increased ADG over 11 to 24 and 11 to 42 days, but reduced (P<0.05) feed conversion ratio and mortality rate over the entire experiment (11 to 42 days). An increase in the superoxide dismutase activity was also associated with an increase in the DEB of the diet (P<0.05). Increasing the threonine level in the diet decreased the blood triglyceride concentration, but elevated the values of blood uric acid, thyroxin, and superoxide dismutase, as well as the toe web thickness 24 hours after PHA-P injection (P < 0.05). The interactions between DEB and threonine levels were observed for relative thymus weight and primary antibody titers against infectious bronchitis vaccine, indicating that the effects of threonine on these traits were more marked in broiler chickens fed on the high DEB diets.
Discussion The chickens suffer from respiratory alkalosis in heat stress, and thus an increase in sodium bicarbonate or potassium bicarbonate, which leads to increased dietary DEB, exacerbates respiratory alkalosis. Accordingly, the lowest growth performance in this experiment belonged to the high DEB group (325 mEq/kg diet), which was achieved by adding potassium bicarbonate from 0.88% in the growth diet to 0.95% in the final diet. On the other hand, reducing dietary DEB value (with increasing the concentration of dietary chloride) has been reported to reduce blood pH by reducing the concentration of bicarbonate in the blood, and even cause metabolic acidosis, which could be a reason for improved growth performance of broilers that received the low DEB diet. In the present study, the high DEB diet could improve immune response, but those values were higher when birds were fed diets containing 110% threonine, as indicated by the interaction between DEB and threonine level. The reason for this change in the immune response to an increase in dietary threonine levels with modifications in acid-base balance is unknown. This may be linked to enhancing the production of ammonium in the kidney due to increased amino acid concentration, which stimulates protein synthesis and inhibits protein degradation of the tissues. This effect, in turn, may increase antibody synthesis by increasing threonine levels under alkaline conditions. Another factor for the negative effect of the high-DEB diet on growth performance could be the stimulation of the immune system. By stimulating the immune system, nutrients will be used to produce immunoglobulins and hence growth will be retarded. Under the condition of this study, the addition of threonine to the diet at 110% of the commercially recommended level increased the superoxide dismutase activity. Similarly, increasing dietary levels of threonine from 85 to 125% of the NRC recommendation increased serum glutathione peroxidase and superoxide dismutase activities in broilers. In addition, reducing the DEB increased blood superoxide dismutase activity, which could be a reason for improved growth performance in the related-groups under heat stress conditions.
Conclusion According to the results of this study, decreasing the DEB from 325 to 175 mEq/kg could have beneficial impacts on growth performance and antioxidant status, while increasing dietary threonine from 100 to 110% of the strain recommendation had positive effects on the immune response and antioxidant status in heat-stressed broiler chickens. In addition, using threonine at 110% of the commercially recommended level in a high DEB diet could improve the immunity of broiler chickens under heat stress conditions. 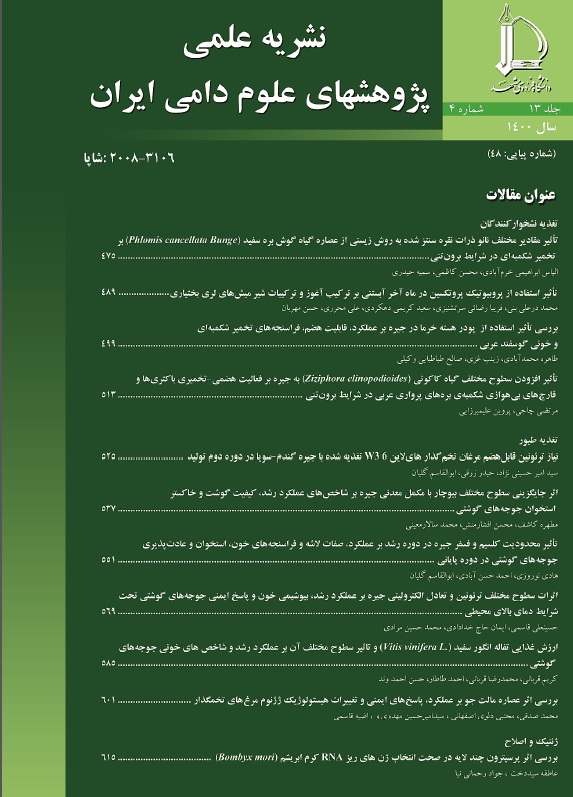