Introduction[1] Arabi sheep population includes almost 55% of the local sheep population in Khuzestan province. Lamb mortality is a universal problem in sheep breeding that may be reached to 20-40% of total lambs born and could impact the genetic improvement, animal welfare and economic viability of sheep breeding, adversely. Research on improving survival of lambs is likely to have a higher pay-off than research on improving the number of lambs conceived. Lamb survival is a compound trait affected by many various factors related to climate, management, lamb and ewe behavior and genetic effects. Lamb survivability is controlled by genetics of the animal, contributed by direct genetic and maternal effects and also by environmental effects. There are disagreements among researchers about using a suitable model to analyze the survival traits, and each researcher has suggested the use of specific models. In general, the use of linear and threshold models has been suggested for survival trait analysis. Although survival has great economic importance, in the studies conducted on Iranian livestock, less attention has been paid to it. The aim of this study was to analyze the genetic parameters for the survival of Arabi lambs from birth to one year of age using linear and Weibull models.
Materials and Methods in this study, 5452 lamb survival records collected by the Jahad Agricultural Organization of Ahvaz from 1993 to 2005 were used. Traits included were cumulative survival from birth to the end of one year and on a monthly basis. In order to estimate genetic parameters using linear models, the Restricted Maximum Likelihood (REML) method was used in Wombat software based on a univariate analysis. The Weibull model and Matvec software were also used for estimating variance component and genetic parameters of Survival rate.
Results and Discussion Different models compared using the likelihood ratio test. For survival traits until 1, 4, 5, and 10 months, the model 4 was suitable, which include the direct additive genetic effect, maternal additive genetic effect and their covariance. In the case of until 2 months, the best model was the model 3, which include the direct and maternal additive genetic effects. For until 3, 8, 9, and 12 months, model 1 including direct additive genetic effect was selected. And for other traits Model 5 (direct additive genetic, maternal additive genetic, and maternal permanent environmental effects) was chosen as the best model. The direct heritability of survival rate estimated from different linear models was in the range of 0.025 to 0.061. In general, despite the high economic importance of survival in the breeds until one year of age, due to low estimates of the inheritance of these traits using linear models, it cannot be expected that genetic selection alone can make significant genetic progress. The genetic variance component among sires, heritability on the logarithmic scale, heritability on the original scale, and effective heritability obtained from Weibull sire model were increased to a peak point at 4 months. After that, a decline occurred until 5 months, and then a fluctuation was observed until 9 months. A limited increase was found in the 11 and 12 months. The heritability of sire model, in the logarithmic scale, had a low to medium range (0.13-0.25), and in the original scale had a medium to high range (0.39-0.75). The effective heritability was estimated in the medium range. Estimated values of the survival heritability using the Weibull model was greater than the value obtained from the linear animal model. Although heritability estimations for survival and mortality is low, it is possible that genetic progress may be enhanced by selecting lambs with higher breeding value for survival.
Conclusion Estimation of the genetic parameters for survival lambs from birth to one year of age using linear and Weibull models were low vs medium to high, respectively. Therefore, based on the results of linear models, response to  direct selection to improve the survival of lambs in this breed will be very slow, and more attention should be paid to improving non-genetic factors and indirect selection and outbreeding, but based on The results of Weibull models, it seems that the rate of response to genetic selection to improve survival trait is faster using these models compared to the linear models, suggest that lamb survival could be improved  through direct selection and could be included in the Arabi sheep selection  index. 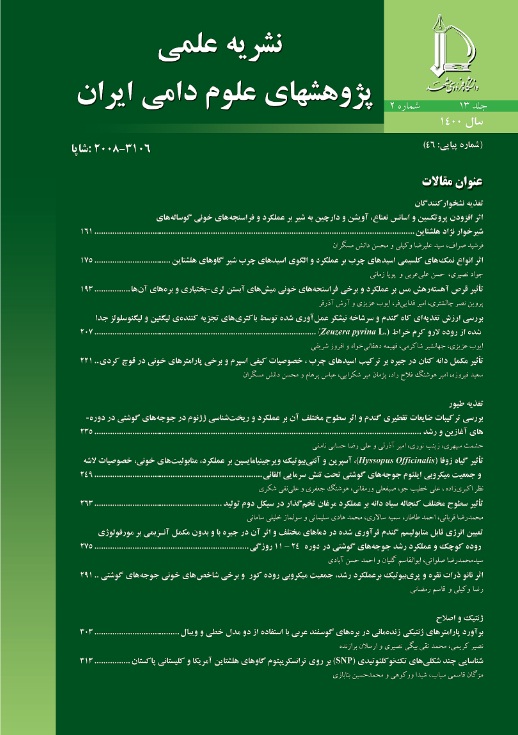