Introduction[1]Utilization of all potential existing resources as animal feed, especially the resources that have no use, can compensate the deficiency of forage and decrease the cost of livestock rations. Conocarpus erectus tree grows on the tropical and subtropical coasts throughout the world. This plant was cultivated in Kuwait, since it can grow on warm climate and salty water. Conocarpus erectus was considering for its resistance against heat; due to its resistance and compatibility with warm climate condition, infertile soil, soil improper aeration and drainage, air pollution, as well as compacted soils, its cultivation has been developed in such areas. This plant has lower nutrient requirements, it is an evergreen shrub and highly resistant against salinity and drought, and if soil is not humid, it will tolerate drought. The extension areas of this plant is in USA, Bahama, Caribbean, Central and South America from Mexico to Brazil on the Atlantic coasts, from Mexico to Ecuador on the pacific coasts, and west of Africa and Melanesia and Polynesia. This plant has widely been cultivated in Khuzestan, Bushehr, and Hormozgan in Iran. Considering its very rapid growth, this plant is pruned daily by municipalities, and its transportation out of cities and disposing is expensive as well as will cause the contamination of environment. Therefore, application it in the ration of livestock would be a proper option to utilize this plant residues. The present experiment was conducted for determining the appropriate amount and form of the Conocarpus leaves in the diet of finishing lambs.

Materials and Methods The present experimental were conducted in Agricultural Sciences and Natural Resources University of Khuzestan. The Conocarpus leaves was prepared from shrubs pruning by municipality in spring season and transferred to the research station for ensiling or drying. To prepare Conocarpus silage, soft branches containing leaves were chopped and ensiled after adding 2% sulfuric acid/kg dry matter (V/W). In order to prepare the dried Conocarpus, the leaves were dried out by exposing to fresh air in the shade and then stored. Twenty-four male Arabic lambs with an average weight of 33 ± 3 kg were used in a completely randomized design with 3 treatments and 8 replications. Experimental treatments were consisted of control diet (without Conocarpus) and diets containing 50% silage or dried leaves of Conocarpus replaced with corn silage. For measuring the nutrients digestibility during seven days, the feed orts and feces were daily weighted and about 10% of them were kept in the plastic bags at -20˚C. At the end of seventh day, the orts and feces samples were mixed and one representative sample obtained. The samples were oven-dried and grounded using 1 mm mesh screen. The chemical composition of Conocarpus leaves, rations, feed orts and feces, included: dry matter, acid detergent fibers, ash, crude protein, neutral detergent fibers, lignin, and tannin of Conocarpus leaves were measured. The dry matter intake, initial weight, every two weeks weight, final weight were recorded and feed conversion ratio and feed efficiency were calculated. Ammonia nitrogen, pH, protozoa population of rumen fluid, blood parameters consisted of glucose, cholesterol, triglyceride, high density lipoprotein (HDL), low density lipoprotein (LDL), and BUN, were measured. The results data was analyzed using the GLM procedure of SAS (version 9.4). The differences among treatments were evaluated using Duncan’s adjustment, when the overall F-test was < 0.05.

Results and Discussion The use of Conocarpus leaves had no effect on the dry matter intake, the apparent digestibility of dry matter, organic matter, protein, NDF, ADF, ammonia nitrogen concentration, rumen fluid protozoa population, blood cholesterol, triglyceride and  urea nitrogen. The final weight, average daily weight gain, total weight gain of lambs, feed conversion ratio and total feed efficiency were not affected by experimental treatments. The Conocarpus contains the compounds such as tannin, saponin, and other polyphenolic compounds, which have caused the decline of the feed consumption. There are certain proteins in ruminant salvia, which are capable to bind with these anti-nutrient compounds and decreasing their impact on feed consumption. The nutrients digestibility were not affected by the experimental treatments. Diet containing tannin increased DM digestibility but, had no effect on ether extract (EE), crude fiber, and ash digestibility and decreased protein digestion. The growth performance and was not affected by the experimental treatments. Supplementing the ration of finishing steers with the herbal mixture containing tannin had no effect on the final weight and average daily gain. The concentration of rumen fluid ammonia in current experiment was in optimum range (8.5-30 mg/l). Rumen fluid pH is biologically in the normal range of 6.1 – 6.9. The effect of the secondary metabolites on the rumen pH were different in various studies, from no influence to incremental effects. The concentration of blood plasma glucose in current experiment was in physiological range of 30 to 60 mg/dl. The feeding the finishing lambs with the extracted tannin of the pomegranate peel, as the rich source of tannin, had no effect on the blood glucose concentration. The concentration of blood urea nitrogen was not affected by the experimental diets.

Conclusion According to the results of present experiment, diets containing dried or ensiled Conocarpous leaves had no adverse effects on digestion of nutrients, finishing performance, and blood and rumen parameters of finishing lambs in this experiment. Therefore, it is possible to replace both silage and dried leaves of Conocarpus in the diet of finishing lambs until 50% instead of corn silage. 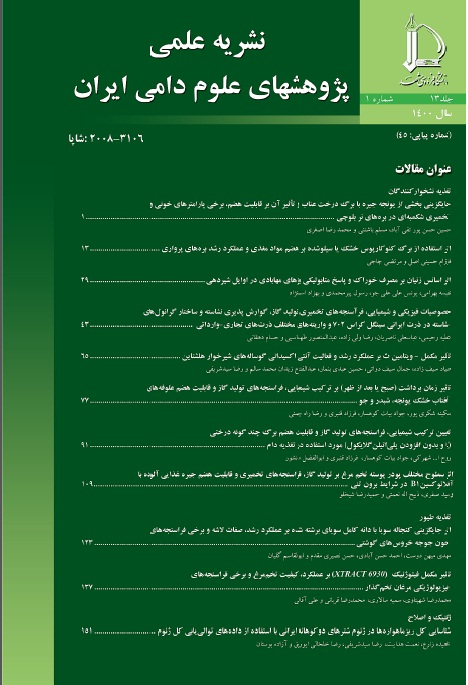