Economic analysis of production period of broiler breeding in Kurdistan province “A case of Sanandaj, Kamyaran and Divandareh cities”

Introduction During development process attention to the improvement of scarcity compensation protein of food regime is necessary and important and due to that, the most of developing countries attempted to compensate scarce protein of increasing population accompany of poultry industry extension. The current study attempted to investigate an economic survey on broiler emphasizing on deduction in production period. After Islamic revolution Iran, had been tried to compensate the shortage of broiler with supply of subsidized poultry. To this context, to increase the domestic production, the government started to pay loan with the lowest interest rate even at zero per cents and in some cases a nonrefundable loan.  The Kurdistan province as no developed area could benefit from the same policy with significant different subject to receive such supports and by this poultry industry in the case of farm number and spread throughout area of it has made rapid growth.   Among 18459 work official document issued in the country at till the year 2018 Kurdistan province with 740 farms stand at 8th rank in the country.  Reverse of before, the problem of the country as well as the study are do not go to the production amount but there some problems such as high FCR, high-cost price, nonstandard of chicken size and supply and value chain management from farm to final consumers.  That’s why the current study tries to investigate on some variables to find the way of improvement of this industry and increase its productivity in all dimensions.
Material and methods The statistical population of the study are entire broiler poultry farm in Divandareh, Kamyaran and Sanadaj cities which are about 261 farms. Through the simple random sampling 158 farms as sample for the study were selected. The cross-section data through interview and filling questionnaire for the year 2018-19 were collected and partial budgeting and benefit–cost ratio used to analyze them. The FCR (Food Coefficient Return), production period, waste percentage, net revenue, period gap, average of harvested alive weight, number of weightings, used inputs, production capacity, production costs and demographic characteristics of managers, are studied as research variables.
Results and discussion The results showed that, the average time period was 55 days, period space average was 31days and FCR average is about 1.94 kg. The results of this part have significant difference with those which Tandoğan and Çiçek found but although compare to the Sahraie et al., we found some differences but it’s showed in both study areas the production and management faces significant challenges. Also, the results showed that, feed cost and one day old chicken with 76 and 14 per cent have the highest share of total cost and this result is same as that Tandoğan and Çiçek found. The benefit-cost ratio is about 1.3 and the best age of harvest with 7 days gap is 42 days. Address to the results, fall from 55 days with 31 days gap to 42 days with 7 days gap we may increase the number of production period from 4.2 to 7.4 and an increase in net gain from 324 to 670 IR million Toman (in case of full capacity used and stability of prices) annually. In case of the results, we found the similarity with Szollosi, et al., results. Address to the above-mentioned results we may say that, the broiler production in the study area needs more attention not only in case of economic issues but in social as well as political one, since there some externalities with high fluctuation of the price and production amount. Address to the Iran’s political situation any problem in people welfare may cost a lot for the decision makers. In other view, since Iran has started her developments programs after revelation with equally distribution of welfare for all citizens without any discrimination theme, therefore any significant gap between what they ask with those are going to happen may impose the highest cost to country management.
Conclusion According to the results, by reduction both in production period and period gap the possibility of improvement of farm space, labor, feed, produced chicken meat and speed of capital return will increase but in the case of high gap between the production period and high production period the supply elasticity decreases and price fluctuation will increase. Therefore, based on the results, reduction of production period maybe recommended to decrease the demand price elasticity, increase supply elasticity, reduction of production cost price, and increase of return and preparation of export issues. 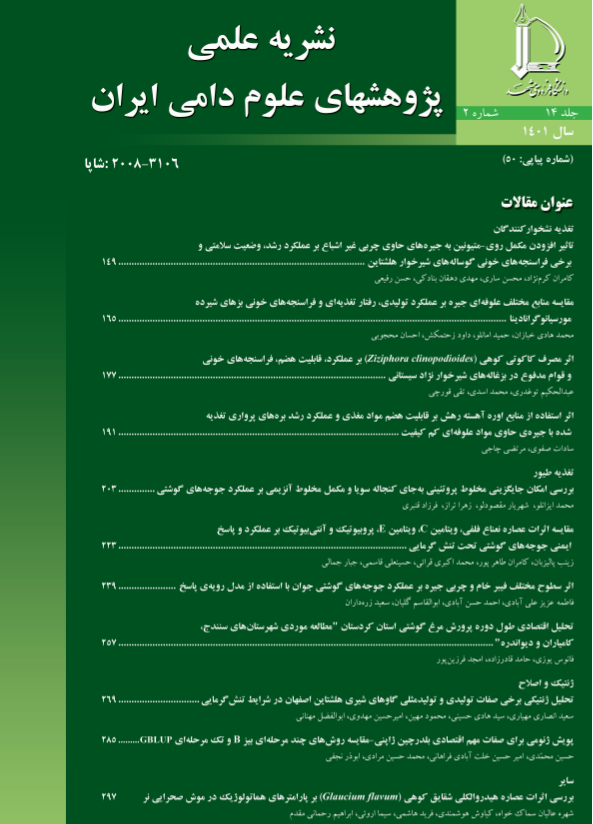